In Ulster Park, Town of Esopus at the Intersection of Broadway and Clay Road
3 mins south of Kingston on Broadway (Rt 9W)
10 mins North of Rt 299, Highland

Located in scenic Town of Esopus, the Gilpatric-VanVliet Funeral Home is independently owned and operated by the VanVliet family whose roots in the Town of Esopus trace back over 350 years. Previously owned and operated in Kingston, NY by the Gilpatric and Murphy family of funeral directors (1872-2009), we are very proud of the countless testimonials which attest to our continued commitment to family service that is personable, professional, and dignified. We serve all faiths, denominations and cultures. 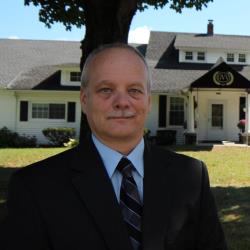 For over 39 years, Harry has served the community as a deputy sheriff (Captain-Ret) and now as a local funeral director/funeral home owner. Having worked in various Kingston area funeral homes since 1994, he earned his NYS license to practice funeral directing in 2005. In 2007, he earned the designation of Certified Funeral Service Practitioner (CFSP) from the Academy of Professional Funeral Service Practice, uniquely indicating he has voluntarily elected to participate in quality educational and service opportunities that far surpass what the funeral service licensing board in NY requires. A certified Funeral Celebrant, he is a member of the NYS Funeral Directors Assoc., Dutchess-Putnam-Ulster Funeral Director's Assoc, Esopus Business Alliance, a life member of the Ulster County Chiefs of Police Assoc. (serving as Secretary from 2002-2007), and Klyne-Esopus Historical Society. A lifelong resident of Esopus, he lives in Ulster Park, with wife Gina, and two children?