Ulster County Executive Pat Ryan will be the special guest speaker at the next Virtual Breakfast Meeting of the Ulster County Regional Chamber of Commerce. The event is scheduled for 9:00 – 10:00 a.m. on April 20. The breakfast, sponsored by Sawyer Savings Bank, will be broadcast from The Venue Uptown and Livestreamed on Facebook and YouTube. Kingston Radio will provide technical support.

County Executive Ryan will bring chamber members up to date on plans to reimagine the former Bank of America building in the town of Ulster. It is the premier building on property now known as Enterprise West. Ryan signed legislation last month transferring Enterprise West to the Ulster County Economic Development Alliance (UCEDA) and clearing the way for its possible revitalization. The site has sat largely dormant since IBM pulled up stakes in 1995.

Ryan is also expected to detail major initiatives that will simultaneously protect the environment, boost the economy, and help realize a Green New Deal in Ulster County.

Earlier this year the County Executive unveiled his Project Resilience Universal Basic Income (UBI) Pilot Program. More than 4,200 people have applied to receive $500 a month for a year. The recipients will be chosen by lottery by the University of Pennsylvania, which is performing the study.

Ryan, a former tech entrepreneur, U.S. Army veteran and graduate of Kingston High School and the U.S. Military Academy at West Point, has been county executive since 2019.

Virtual Chamber Breakfasts are a great way to stay on top of current events. For more information, contact the Chamber at (845) 338-5100 or go online at www.ulsterchamber.org. 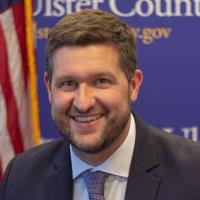